If there is one month that it’s compulsory to be drunk throughout its December. The office parties, the glasses of mulled wine given out by shop keepers to coax you into buying more, bucks fizz on the day itself and of course the odd tot of whisky just warm the cockles on a cold winters night.

How to make your own boozy advent calendar

I’ve given suggestions for each day with my advent calendar, each of the shots offered should be at their peak on the day they are drank.  The little 7oml Kilner jars are perfect for the job. But you could hunt around and use any little jars you might have. Indeed, you may even choose to treble up and use jam jars!

One half size bottle 375ml of cheap Dry white wine
One750ml bottle of
One 500ml bottle of Brandy
One 350ml bottle of Whisky
Herbs, spices, sweets and flavourings of your choice.

Make all of the jars on the 30th November.

Day one- four the wine infusions

Since wine doesn’t keep so well once opened the wine infusions should be made in the first four days. The best infusions for wine are herbs and the flavours can be enhanced by a small amount of zest. Here are some suggestions, but please experiment. Remember you are only really having a shot of each.

Jar one – two mint leaves, one 2cm spring rosemary, the briefest zestings of a lemon. Top up with white wine and leave overnight.

Jar three – A dash of lime zest, a sprig of thyme, top up with white wine leave for three nights.

Jar four  – The merest sprinkling of lemon zest, a tablespoon dried camomile flowers, top up with white wine and leave for four nights.

Jar five – Khrenovukha – Horseradish vodka. A tablespoon horseradish, quarter of a teaspoon of honey, top up with vodka. Leave for … you know what, you I’m sure you’ve got it by now.  Remember, each infusion is designed to ready by the time you want to drink it.

Jar six – Bastard infusion. One scotch bonnet, top up with vodka. Be prepared to hate me.

Jar Eight – raspberry vodka infusion. Four raspberries. Top up with… hang on, I’m sure you’ve got the fact you need to top each one up by now too.

Jar Nine – Skittles vodka infusion. I’ve never tried this, I think because I’m a snob. I’ll have a go this year and pull that plum from my arse. Take 10 skittles of one colour, cover with vodka and shake like buggery. Wait nine days (although they will be ready in a lot less), filter before serving.

Jar Eleven – Bitter orange vodka – Zest a blood orange. You’ll only really need a small amount of zest, about one teaspoon full. So you could freeze the rest. Consider using this one in a Negroni in place of Campari.

Jar Twelve – Very hip vodka – Half fill your jar with diced and driedrosehips. Top up with Vodka.

Jar thirteen – Cucumber Vodka – You need to chop up the cucumber to tiny little pieces of this to work. Use English cucumber if you can get it.

Jar Fourteen – Aquavit – A pinch of fresh dill (or that crap you get in packets if you can’t get any. A whisper of lemon zest, about six caraway seeds, a starfish leg of star anise, four fennel seeds.

Jar Fifteen – Prune whisky – Fill a jar with prunes and top up with whisky.

Jar Sixteen – Honey whisky – Stir together a tablespoon of boiling water and a teaspoon of honey. Decant into jar and top up with whisky. Seal and Shake.

Jar Seventeen – Irish Cream – This one has to go in the fridge. Blend 18ml Double cream, 26ml condensed milk, 22ml Irish Whisky, 1ml cold coffee, 2.5ml chocolate sauce (the stuff from a tube), a drop of vanilla and almond essence. Pour into the jar and put in the fridge.

I’ll come back to these and Day 25 in my next blog. Don’t worry I’ll publish it before the end of the month!

In the meantime if you have any suggestions for the last infusions or you have any questions then please do comment below. 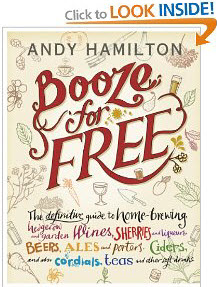